The 2016 Monte Vista Mustangs look like a potential powerhouse on paper.  The Mustangs boast 4 legitimate Division 1 prospects as of right now and look to be trending upward quickly.  QB Jake Haener has established himself this off-season as one of the nation’s top signal callers for the class of 2017.  Haener will be handing off to RB Shane Perry while looking to find his 6-5 TE Erik Krommenhoek, who has also established himself as one of the top TE’s in the country.  Defensively the Mustangs boast Defensive Player of the Year Candidate, Nate Landman, who holds multiple Pac-12 offers as of now.  Landman has one of the more exciting films we’ve seen in a while with his speed and closing ability from the LB spot.  Upfront Monte Vista will have a strong offensive line returning led by Division 1 Tackle Corey Luciano, Zach Zeising and solid group of young lineman.  If the Mustangs can defeat Foothill in Week 2 – we are looking at a potential undefeated  EBAL showdown with De La Salle in the regular season finale. 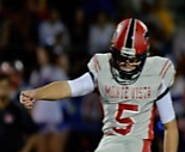